Wow! It's been a fair while hasn't it. You'd be forgiven for shaking me about and asking just who I think I am for spending so long not talking to you. But there comes a time when you realise that writing about your comic is all well and good, but if there's no new issue on the horizon then you should sometimes shut up and make one. 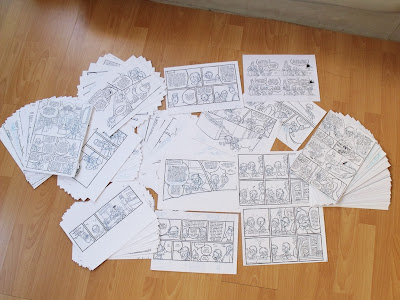 So that's what I've been doing! You're looking at a harvest of newly sun-ripened Demon Tomato #3, pressed onto the purest board in all of Bristol and ready for transfer to a computer, the majority of it having already been so transferred. As a result, you'll be seeing a third issue of my comic very soon, preferably in time for Thought Bubble in Leeds next month, but if this last year has been any indication of anything at all then I shouldn't make silly promises like that. 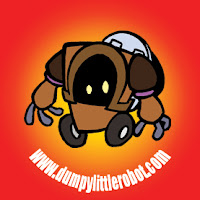 The past year, in case you were bereft of anything else to wonder, has been a bit of a freefall into having to do things for us at Dumpy Little Robot. (That's myself and Abby Ryder, in case you didn't know, now presenting ourselves at comic conventions under a name borrowed from Demon Tomato #2 - more on the subject of conventions later.) On the brief occasions when it wasn't work this year, it was other appointments with the unavoidable, and so the going has been slow on issue three. Which is to say, it's been faster than ever before, but there's been more of it, so it's been about the same. That's due to be changed when I begin issue four... but that's for another update.

For now, all you need to know is that Demon Tomato #3 is going to be pretty downright wickular, and it's going to be it fairly soon.
Posted by Dave Bulmer at 03:41