Yes! Great! I've finally finished every little silly bit and bob that I needed to do to get this issue right, wrapped it all up, and sent it off to the printers. Sounds easy, doesn't it, but so many bits and so very many bobs kept coming up that the whole place is swarming with them now. I've got a folder full to brimming with extra pages and things I decided ought to go in, which means that Demon Tomato #2, which was originally much shorter than the positively bumper first issue, is now exactly the same length but with more pages of actual comic than issue one!

I'm pretty excited about it, so to celebrate, here are three pages of it! These are consecutive pages, so it's a nice chunk out of the middle for you to sink your special reading-teeth into. You can of course click these to make them all big and readable. 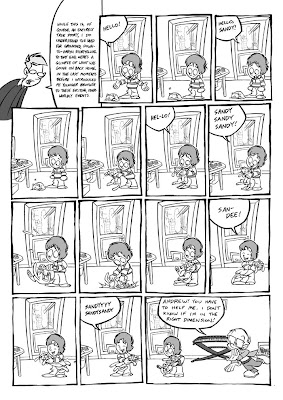 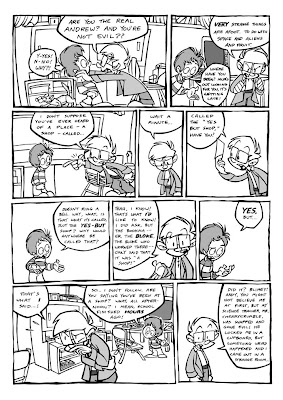 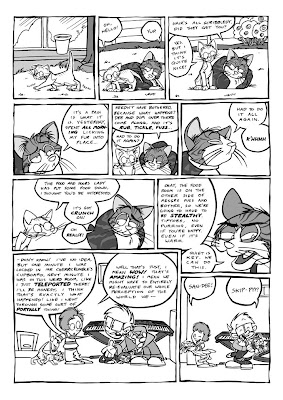 If you happen to have read issue one already, those pages do contain a rather big clue about how the cliffhanger is resolved, but I've shown you them anyway because the really interesting part is what happens immediately after it's resolved, which isn't spoiled here. The pages also give you an example of the comic's tendency to wander off and spend narrative time with previously non-speaking (or completely unmentioned) characters, which you've already seen if you've read the page where it skips off to look at what's going on in the throws of a sweet little alien war. That's a few blog posts ago, if you haven't.

So! Demon Tomato issue #2 will be available hopefully in a short few weeks, and if fate bends itself to my favour I might even have them in time for the British International Comics Show in October. If not, or even if so, there's no reason to think it won't be available at Thought Bubble in Leeds shortly afterwards.

Meanwhile, here's the cover, with colours by Abby Ryder. 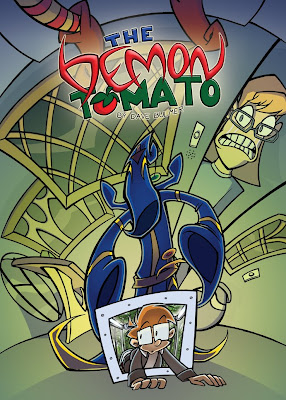 That's what it looks like! Remember it! This issue's pretty good, you'll want to get this when it comes out. (Just a bit of subliminal advertising there. You probably won't even notice it.)
Posted by Dave Bulmer at 01:21

I love the cat page. And the cover is awesome!

Also the cover looks great, although I am sure I have already said this 10000x.