A Comic Without Rules

I was at Wirral Grammar School for boys today. Don't worry, I was invited. There's a class there who are working on producing their own comics, as a fun end of term project. I was asked to come and talk to the class about comics, how to reasonably go about making them, and what different sorts of comics there are.

This being the future, they had a laser display board that I was able to project images onto, so I blew up one of Chris Ware's incredibly complex diagram comics. He does these amazing things where there's no starting point, no end, panels and pathways knitted together in very unusual ways, and not even a correct way up. You just have to start somewhere, anywhere, and let the comic pull you along until you come out with your head spinning, but having read an extremely immersive and rich comic. The comic in question is the one that you come to about a page into (at least the paperback edition of) Jimmy Corrigan: the Smartest Boy on Earth, which you should all go and read if you haven't already. I'd love to post it here, but obviously it isn't mine.

I'll tell you something that is, though.

I showed them this because I'd just finished showing them something not nearly as brilliant, but conceptually related, which I'd like to show you as well.

When I was six years old, I decided I wanted to draw picture-stories. I didn't even know about comics, I just knew that a picture was like a snapshot of a story, so in theory you could tell a whole story just using pictures. But I didn't know about the rules or the traditions of comics - even the simple ones like reading from left to right - so I had to make them up.

I remember wanting to devise a layout that would let me tell a whole story on one page using loads and loads of tiny little images, but that would let the reader know at a glance who the comic was about. The idea was that if you had lots of them, and you knew which character you wanted to read about, you could easily pick the one you wanted just by flicking through them.

This is what I came up with. 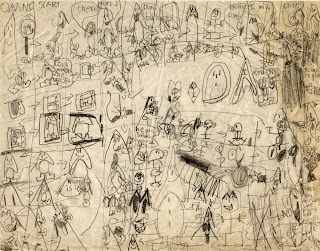 Just looks like a scribbly mess - it's interesting, but it isn't actually readable. When I found this page a year or so ago I thought I'd never make sense of it. I could tell the two figures at the bottom were the two main characters (the at-a-glance filing system I was talking about), but I thought that was all I could work out. But then I noticed the page is covered in little arrows, pointing from one panel to the next. If I could work out where they all led, I might be able to read the comic!

And in the end, having made sense of it all, I drew this: 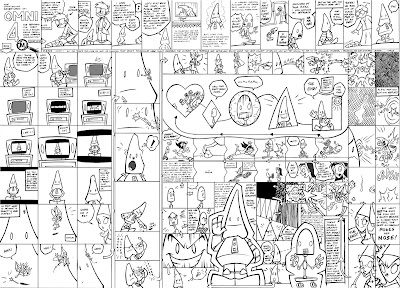 You can click that to see the full-size giant new version of the comic. A completely re-drawn version of the exact same comic, but this time easy to read, easy to see, and with easy-to-follow arrows pointing the way. Feel free to compare the two and satisfy yourself that I haven't cheated by changing the story, this is a 100% faithful remake of an epic infant-school opus. I think you'll enjoy it, if rambling stories about nothing by a six year old are the sort of thing you like. And if they're not, what's wrong with you?

If anyone who was actually present in the class is reading this, and I didn't have time to answer your questions, either leave a comment here, or if you'd prefer to email me then my address is in my profile. Dr Warren has it as well though, so if you'd rather ask her to send something on to me I'm sure she'll be happy to.

Thanks for listening, chaps!

Oh, and I did find that video in the end, with the pig and the wolf guy and all the photos. It's here.

hi i was in that lesson today i would like to say that it tore strips off being in maths so i thank you and thank you for showing me that drawing isnt as bad as an art lesson its bad cos i cant draw well but ill try thanks a lot for helping me draw that hand too p.s any tips on drawing bodies that look decent ---jordan---

Whoops! Ignore that message above, I went and deleted my reply by mistake. Here it is again:

When you're drawing with those blue pencils, doing the first stage of the drawing, it's always a good idea to try not to be too neat. If you're drawing carefully, you'll end up feeling like you're not doing it right. Instead of worrying about what would look good, think about what you could scribble onto the page that would help you.

So to draw a character's body, first think about how you want them to stand, try and picture it on the page, then just draw either a couple of lines that express that sort of shape, or an oval or rectangle that makes a very simple version of the body's shape.

Once you've done that - just like I showed you with the fingers - you can adding details.

Have a look at some of the examples here: http://www.squidoo.com/How-To-Draw-Cartoon-Characters

You'll find on that page a few different ways of drawing cartoon human bodies out of sticks and ovals that might help you. Remember, you'll be able to go over it and neaten it up later, so don't worry about being rough or even getting it wrong first time. It's not the final version that people will see.

Oh my goodness! I remember anticipating the results of this little jaunt. I hadn't seen little dave's comic, original or redone, and both of them were kind of a shock. The first because it's so complex, and the second 'cause you sorted it out in a no-nonsense way!

You are a serious for real cartoonist in my mind! So it better be the way you see yourself.

Wolf and pig video was wery funny, too.

Hi Dave. Just wanted to say thanks again for coming in to talk to the boys. If you ever need a second career, you should consider going into teaching - you were quite inspirational! The boys are hard at work on their comics, which I'll be publishing to our website once they're done. It'd be great if you'd take a look and give us your expert opinion. Will send you the link when they're up.