Keen-eyed, dull-lifed people will be readily aware that I haven't updated this blog since October. Now, I know what you're thinking, you're thinking that's because I'm very lazy aren't you? But no! Emphatically and pleadingly no. I've been fairly prolific in November and really prolific in December, because I have been doing this: 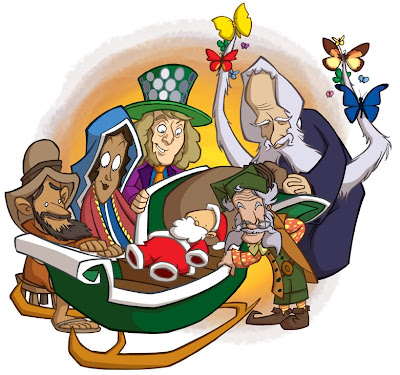 This is a thing that I do each year at the SA forums, the premise of which is a bit complicated but goes something like: I play an exciteable, illiterate child, who wants to help out those who don't have an advent calendar by sharing his. His turns out to be magic or silly in some way, everyone ends up sucked into the ancient adventures of Santa during his early life, and fun times, or at least times, are had. All of this is presented in the form of several posts to a thread, at least one per day, in which the child talks the readers through what today's door (or "dore") looks like, and what chocolate is in it. But with time travel and characters from Christmas films.

This year, the whole process has been exhausting! I did start early, just like I promised myself I would, but there's just something about a deadline, isn't there. Until December actually began, I was drawing bits of it here and there, not really getting very much done. Just like last year, it was only when I found myself actually having to do it, really having to do it right now otherwise it wouldn't get done, that I started to really do it. Unlike last year, the workload was something like a a hundred billion times more, because I decided to use proper, (arguably) full-quality illustrations instead of the crude MSPaints of previous years. If I was going to spend December whacking together a lot of drawings, I reasoned, I'd better make them good enough to put in the portfolio afterwards.

Abby liked the idea, and agreed to help. In the end she did what she has described as "some," and I'd insist was at least as much work as I contributed.

In short, the day after Boxing Day was a huge relief, and although I've already ended up doing a new job for someone, it's still a huge relief to have this big project out of the way. When every day's the big deadline, it can get overwhelming.

I'll be posting some more of the drawings we produced for it on this here blog soon, but if you can bear to read something badly spelled (don't worry, it's deliberate!), then you can find the whole story RIGHT HERE!


So, soon I'll have the opportunity to get back to work on the Demon Tomato. Issue two is finished in all but reality, so it won't be long before I'll be able to stitch the thing together and start selling it alongside issue one. Although the print run is fresh and shiny, the actual original pages of the comic are starting decidedly to yellow and curl, and those are the ones that survived that time I left them next to an open window in a storm. So it'll be a quite exciting prospect to actually have a second issue done now that I'm a grownup and can produce these things a lot faster - and that of course will open the door to printing issues three and four, which are new, just about fully pencilled, and dangerously close to being fairly goodish.

What I'm saying is this: if you liked the Advent-ure Calendar, please try reading my comic. It's quite nice, it displays some potential, and it is available precisely HERE.
Posted by Dave Bulmer at 03:46

I have the first issue of Demon Tomato and it's ace, but lonely, so issue 2 cannot come quickly enough.